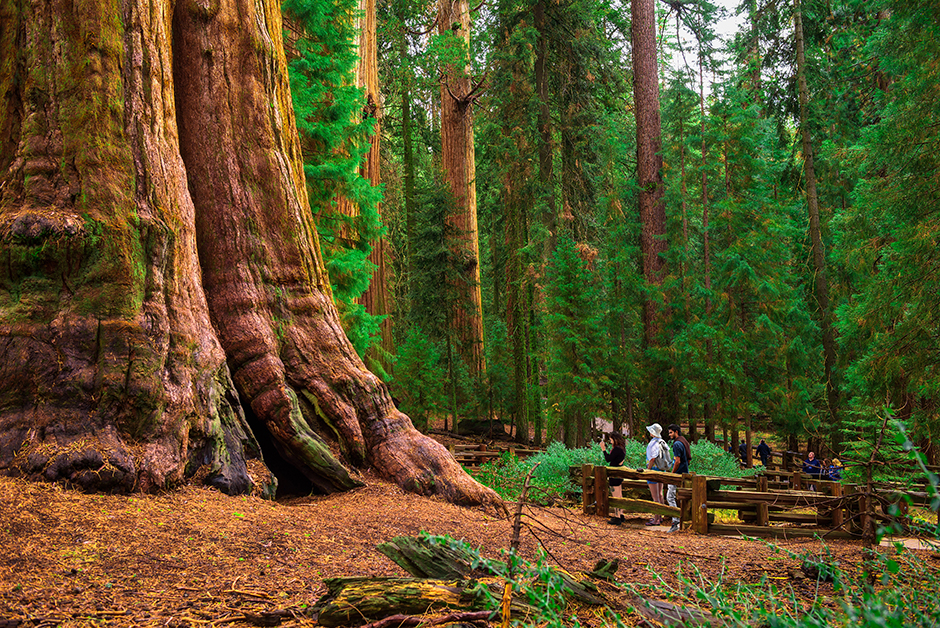 THE GIANT SEQUOIAS OF CALIFORNIA ARE AN ABSOLUTELY BREATHTAKING SIGHT TO BEHOLD. THE ROOT SYSTEM OF JUST ONE HAS BEEN KNOWN TO COVER MORE THAN AN ACRE OF LAND IN AN EFFORT TO SUPPORT THE ICONIC GOLDEN STATE TREE.

Their resiliency to thrive, weathering thousands of years of natural and man-made elements, is truly miraculous. The same can be said for the human spirit. In the midst of global conflict and chaos created by power and political struggles, economic and racial inequality, resource scarcity, and religious strife - the sheer magnitude of which affect us all - humanity perseveres. Understanding these roots of conflict and identifying ways to alleviate them while elevating those who are most impacted requires a boundaryless approach.

The UCI School of Social Sciences is home to some of the foremost experts on topics like population, policy, and politics in China, global threats posed by misinformation campaigns, warfare and human rights, pollution, economic turmoil in the European Union, and humanitarianism, development, and AIDS in Africa, to name a few. Their research pursuits extend far and wide as they seek to understand the volume, causes, and consequences of some of the heaviest global topics. The school’s dynamic student programs then take this information and spread it through experiential learning programs that reach populations from local Orange County high schools to refugee camps in contested regions.

We’re seeking your help in growing our ability to tackle some of the most pressing global issues. Through research and student program support, you will play a critical role in extending the reach of our work that gets to the heart of the human spirit that thrives in every single one of us.

Like Daniel Brunstetter, political science, who studies the ethics of war and the use of drones. He was quick to pounce on a new U.S. executive order revoking the public reporting requirement of civilian causalities as a result of drone strikes. Writing extensively on the topic, he pushes for more transparency in warfare policy that recognizes the importance of civilian casualties so that the true costs of war are known.

In logic and philosophy of science, professors Cailin O’Connor and Jim Weatherall are shedding light on the dangerous misinformation age in which we currently live. From a simple “like” on social media to a damning headline of false facts on national news, contributors - unknowing and otherwise - to the rise of fake news can be found everywhere from high school desks to bullpens at some of the most reputable news agencies. Through on-going research, O’Connor and Weatherall study how the seeds of misinformation are planted, who some of the biggest culprits are, and how we can all work to kill it before it grows legs.

In water-conscious Southern California, conservation is a very hot topic. UCI anthropologist Valerie Olson is working with joint-powers water agencies in the state to understand how water is thought of, used, and conserved by people living and working within its boundaries. Her aim: to increase hydro-social justice by finding out how underserved communities think about and use water. This can change the way water management companies worldwide interact inclusively with people they deliver vital services to, ultimately increasing conservation and making its benefits more equitable.

Also in anthropology are Kim and Mike Fortun who are tackling environmental risk and disaster. They use experimental ethnographic methods to understand how people in different geographic regions and organizations deal with environmental problems, health risks, and major disasters. Their fieldwork has spanned highly populated regions in India and the United States focusing on catastrophic disasters and more recently on slower moving disasters, including air pollution. Through research, they’ve found that air pollution - recognized as a major killer of people worldwide - has reached dangerous levels in India and is responsible for a growing number of health concerns.

And this is just a sampling of the work being done by UCI social scientists. Supporting emerging conflicts research through named chairs, fellowships, and scholarships allows these critical studies to extend beyond their current reach to impact more global citizens. •

The research in action branch of social sciences is truly evident in the school’s experiential learning programs which aim to promote diversity and the understanding of different races, ethnicities, orientations, religions, and abilities.

The school is preparing the next generation of strategic thought leaders through learning that is both social and educational in a way that “humanizes” the other, creating a more robust community where diplomacy, critical conflict analysis, and strong friendships combat prevailing simplistic narratives.

Olive Tree Initiative
Social sciences is the proud home of the Olive Tree Initiative. Ranked the top 10-citizen diplomacy program in higher education by the U.S. Center for Citizen Diplomacy in cooperation with the U.S. Department of State, the Olive Tree Initiative is an academically rigorous experiential learning program that educates students of diverse backgrounds and exposes them to myriad, often contradictory, narratives through in-classroom learning and international travel. The cornerstone of the OTI student experience is an intensive study abroad trip with on-the-ground exposure to the people, politics, and realities of the regions studied. Crossing physical and psychological borders daily, students are constantly confronted with diverging impressions, narratives and perspectives from all sides of a regional conflict. More than half of all OTI alumni continue their studies in some of the most elite national and international graduate programs and law schools, winning Rhodes, Fulbright, and Mitchell scholarships, Dalai Lama endowed scholarships, and Rotary fellowships.

With more informed perspectives, DIRHA participants create and implement campus projects that seek to foster a climate of inclusivity and equity. The goal is to build empathy, cultural competency, and leadership skills among high school participants so that they can pass on their knowledge to their peers.

Given its reach, program directors estimate that by 2021, nearly 436,000 students will have been impacted in some way by lessons and learnings heralded by DIRHA participants. 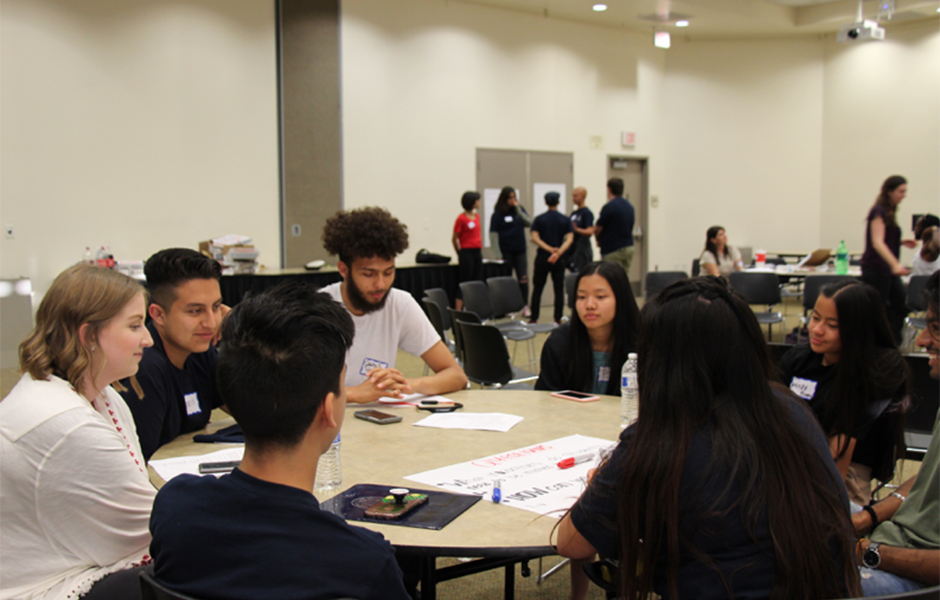 “Youth have significant influence within and beyond their peer groups. By showing them how to counter actions and messages that perpetuate hate, we can alter belief systems that will last through adulthood. It’s truly remarkable to watch students make such a difference at the local level that can, ultimately, change the world.”
– Gerald Solomon, Executive Director of the Samueli Foundation which provided seed funding for DIRHA

Deconstructing Diversity Initiative
The Deconstructing Diversity Initiative (DDI) is a program inspired by the Olive Tree Initiative, with a U.S.-based twist. A cohort of students are chosen each year to take part in an intensive seminar series and then travel to sites of historical and contemporary importance to the experience of race in America. By pairing classroom learning with travel experience across the U.S., DDI provides college students as well as community and campus participants the education, training, and experiences that enable them to better understand, negotiate, and resolve racial and ethnic tension.

Global Connect
And rounding out the experiential learning effort is Global Connect, an innovative teaching and learning program that guides UCI undergraduates in designing and deploying curriculum for Orange County high schools on global issues, ranging from the effects of climate change on international security to issues faced by refugees around the world. The program has reached more than 8,500 OC high school students and more than 700 UCI undergraduate and graduate interns. Two out of every three participating undergrads have gone on to attend graduate school or become educators and nine former interns have received Fulbright scholarships.

Supporting experiential learning programs like these directly impacts thousands of lives from Orange County to the Middle East. Help us extend our reach. •

Global Connect
Global Connect is an innovative teaching and learning program that guides UCI undergraduates in designing and deploying curriculum for Orange County high schools on global issues, ranging from the effects of climate change on international security to issues faced by refugees around the world.