The Brain and Vision | Brilliant Future 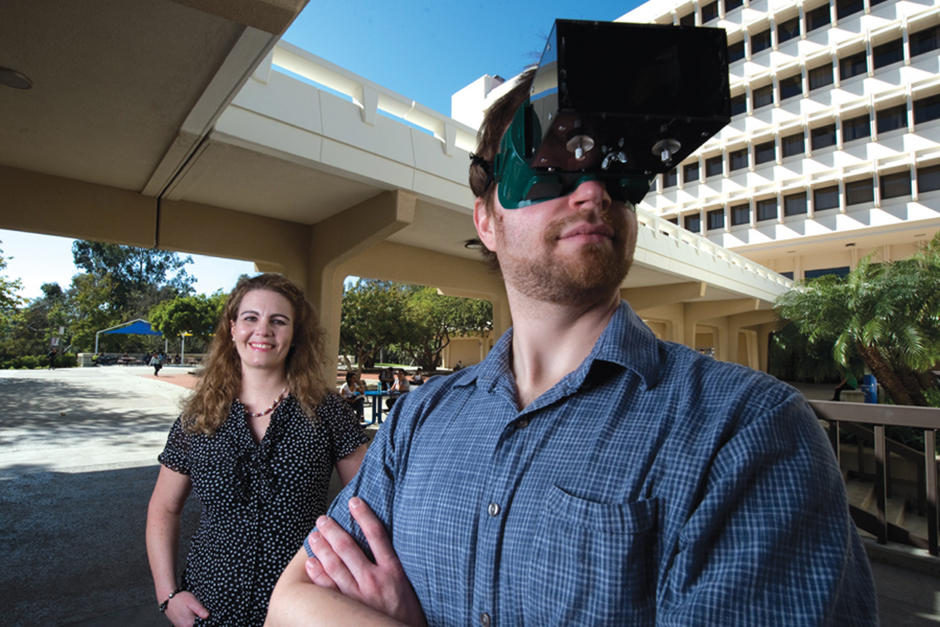 THE BRAIN AND VISION

The first thing you notice after donning Alyssa Brewer’s prism goggles is the nausea. A roiling hits the stomach and grows worse as you begin to move. The world is strangely out of kilter. You reach out to grab hold of something, but it’s not there. Just putting one foot in front of the other takes an enormous effort.

“Welcome to the world of unreality” is what the UCI associate professor of cognitive sciences likes to say when unlucky subjects first peer out of the goggles. They’re an ingenious way to unhinge a person’s sense of reality. The environment one sees is completely flipped; the two prisms inside are tilted so that what you see on the left is really on the right, and what’s on the right is really left.

Brewer is intentionally tricking the brain, forcing it to find a way to adapt to this strange new reality. Her subjects stumble and lurch, grasping at air. It’s the supreme test of the visual and vestibular systems, pathways in the brain that use what you feel and see to enable navigation of the three-dimensional world around you.

Such mind boggling helps Brewer and other scientists learn how the brain works. She hopes experiments like this will lead to new treatments for post-traumatic stress disorder and stroke, perhaps even Alzheimer’s disease and chronic pain.

Paradoxically, flipping reality right to left is a far bigger challenge to the brain than turning things upside down. That’s apparently because of the way its two hemispheres communicate with each other.

“We are not entirely sure why this is the case, but one hypothesis is that the difference is due to the wiring and connectivity of the brain,” Brewer explains.

“The representation of the body is split between the two hemispheres. The left side of the brain is controlling the right side, and vice versa. The visual information from both sides of visual space, for the most part, doesn’t come together until pretty far along the visual processing pathways. We were actually surprised by how different the experiences are.”

The brain is also surprised. When someone wears the goggles, the cerebellum – or lower brain – protests, sending urgent signals of distress and disequilibrium to the cerebral cortex. In turn, the visual and motor regions of the cerebral cortex – or higher brain – frantically try to realign what you see with commands for how to move through space.

“You get this warning from your brain that something is very wrong,” Brewer says. “You get motion sickness, and every head movement you make multiplies the motion sickness.”

Because the prism goggles produce such dramatic changes in part of the visual cortex, we are hopeful that these changes make the brain as a whole more susceptible to restructuring – to being more ‘plastic.’ Such an increase in this plasticity could make other treatments more successful, especially for conditions like PTSD and drug addiction.

But just as she suspected, the brain does adapt. Usually, after a week or so of using only the prism goggles to view the world, subjects who were initially so disoriented they could hardly stand, let alone walk, find their footing and become quite adroit at navigating their new environment.

“You’re forcing the brain to rewire itself,” Brewer says. “And you end up with two different maps in your visual cortex: one that matches the normal visual world to spatial movements and one that matches the flipped visual world to the same movements. When subjects came back three months later and did the study again, it only took about a day for them to readjust to the goggles, suggesting that these changes persist for extended periods of time.”

It’s a form of neuroplasticity in which the brain develops new neuronal connections in response to altered circumstances. Scientists used to believe the adult brain was mostly static, that it couldn’t change in significant ways after an early developmental period. But the explosion of brain research that Brewer and others have fostered in recent decades shows that the lump of gray matter sitting atop our shoulders is far more resilient than we once thought.

Brewer and her colleagues first began fiddling with prism goggles in 2008, shortly after she arrived at UCI. Subjects in the two-week experiments were required to view the world exclusively through the contraptions and wear blackout masks for sleeping and showering.

Brewer found that the prisms caused more than just visual confusion. The brain employs a broad network of input to discern reality, including sound and touch.

As a result, a goggle wearer’s hand almost instinctively reaches for an object seen on, say, the right, even though he or she knows it’s on the left. An hour after one woman took off her goggles, she still automatically turned her head to the right when someone to the left called her name. Individual reactions to the goggles can vary greatly. Brewer says she personally can’t handle more than a few minutes of wear. And that’s an improvement. “I couldn’t even get out of the chair,” she recalls of her first time.

On the other hand, her colleague Brian Barton, a postdoctoral fellow who has worked with Brewer on several research projects over the years, adapted to the goggles with lightning speed. He can accomplish such difficult tasks as walking through a maze or preparing cupcake batter with relative ease.

“I was in the lab with a graduate student and Dr. Brewer, both of whom had just tried the goggles on and were unable to navigate the roughly 15-foot walk to the nearest doorway,” Barton says. “To everyone’s surprise, I was able to navigate not only to the first door, but through another, down the hallway and back, through the two doors to my chair.”

Brewer is not sure why, but she suspects Barton’s frequent forays into three-dimensional video games have primed his brain for the imaginary goggle world. Barton agrees, saying that video games probably gave him practice in dealing with conflicting visual information. They have also identified a genetic difference that affects brain plasticity. These are the types of insights Brewer hopes will illuminate brain function.

Brewer employs groundbreaking neuroimaging techniques that map the physical changes in the brain as it adapts. Images from fMRIs – which measure the fluctuating oxygen levels in clusters of neurons – indicate changes in the visual and motor brain regions after someone has worn the goggles.

Brewer and her colleagues have spent hundreds of hours sifting through the raw data.

It’s painstaking work, but it’s proving that the visual cortex is capable of profound change even in adulthood. This is promising news for those seeking solutions to disorders such as stroke, which often causes vision loss or other visual disturbances.

“We are starting related studies exploring how different types of visual training could be effective for rehabilitation of visual deficits,” she says. “Perhaps the still-healthy brain hemisphere could take on the function of the damaged hemisphere for a particular visual behavior. We see this type of interhemispheric change in the normal brains of our subjects who adapted to two weeks of reversed vision.”

There is even tantalizing evidence from other studies that neuroplasticity can be contagious, in a good way. Once it takes hold in certain areas of the brain, as it appears to do in the goggle experiments, neighboring tissue may become more receptive to change.

Brewer is teaming up with researchers at Stanford University, Baylor College of Medicine, and the University of Texas Health Science Center at Houston to dig deeper into these and associated issues. And her experiments with the goggles continue, now with the new goal of determining how different senses, like hearing and touch, interact with the visual adaptations that her subjects’ brains undergo.

“Because the prism goggles produce such dramatic changes in part of the visual cortex,” she says, “we are hopeful that these changes make the brain as a whole more susceptible to restructuring – to being more ‘plastic.’ Such an increase in this plasticity could make other treatments more successful, especially for conditions like PTSD and drug addiction.”

To conquer such intractable disorders, Brewer notes, it helps to view them from a different perspective. •