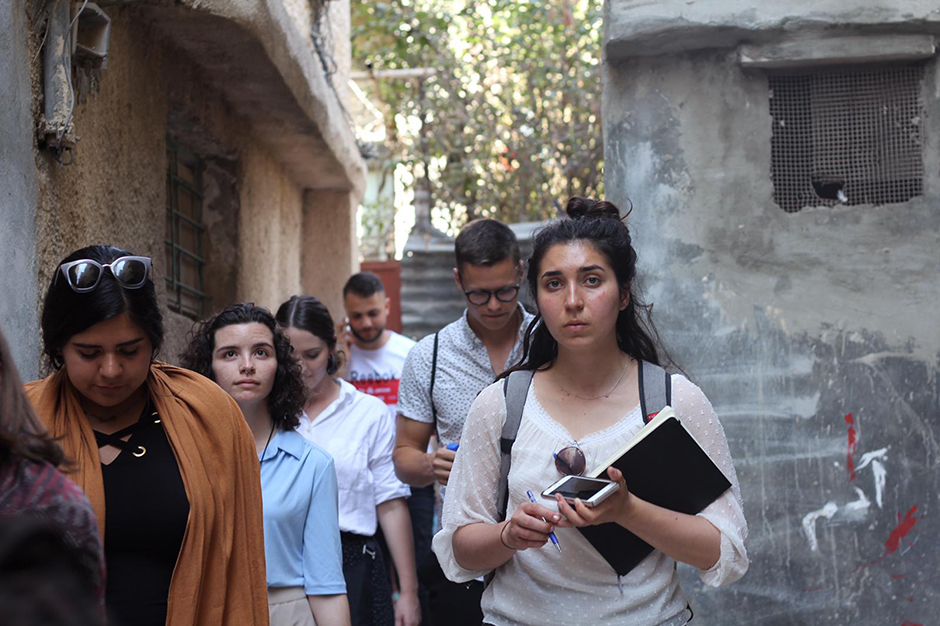 Olive Tree Initiative helps sow the seeds of peace through experiential learning and shared campus knowledge, and in the process, inspires campus spin-offs including DIRHA and DDI

The group has come a long way from 2007, when a handful of Anteater faculty and students began toying with the idea of a one-time Middle East sojourn during which pro-Israel and pro-Palestinian student leaders would encounter both sides of the conflict firsthand.

Two events at UCI sparked the plan. The first was a talk by OneVoice, a celebrity-endorsed organization that supports the creation of an independent Palestinian nation to resolve the conflict. The speakers urged audience members to visit the region.

A few weeks later, in May 2007, former President Jimmy Carter spoke on the same topic at the Bren Events Center. He likewise encouraged Muslim and Jewish student leaders to “form a combined group … to go to Palestine and see what’s going on.” Carter even offered to help raise funds.

UCI’s Center for Citizen Peacebuilding quickly embraced the proposal, invitations went out, and nearly 20 students gathered to discuss the idea.

“At first, the only thing they all agreed upon was that the trip would prove the other side wrong,” says Paula Garb, an anthropology lecturer (now retired) who co-founded the peace-building center. “But I knew it would work when they started talking about how they would ‘keep each other safe’ in unfriendly terrain.”

After more than a year of fundraising and planning, 14 students spent two weeks traversing the Middle East, accompanied by Garb, Daniel Wehrenfennig (a Ph.D. student at the time who now directs the program), and Manuel Gomez, then vice chancellor for student affairs.

By all accounts, the voyage was an eye-opener. Moran Cohen ’10, who grew up in Israel and joined Hillel (a Jewish club) at UCI, said upon returning that the group’s meetings with politicians, religious figures, soldiers, businesspeople, and civilians from both sides “destroyed my previous misconceptions and helped me see the situation in a new light.”

Isaac Yerushalmi ’09, who was president of Anteaters for Israel, had a similar reaction. “Within hours of crossing … into an area that I had considered to be enemy territory my entire life, my life changed,” he recalled. “I felt my enemy’s pain.”

Across the aisle, Amanda Naoufal ’08, a Society of Arab Students member raised in Lebanon and the U.S., wrote that “the establishment of Israel was not something my family understood, including myself, until this trip.”

Then something unexpected happened. As the students shared their experiences at forums on and off campus, the idea caught fire. What was supposed to have been “a one-off tour” blossomed into a small movement, Wehrenfennig says. UCI donated office space to the group, and Cohen – joined by fellow traveler Ali Malik ’09 of the Muslim Student Union – pitched the concept to other campuses.

You can study these things in books, but being there brings them to life.
-Ali Malik ’09

By 2010, UCI offered course credit to OTI participants and helped bankroll salaries to run the program, which had spread to UCLA, UC Santa Cruz, and UC Santa Barbara. The organization also won national recognition for its efforts in promoting “citizen diplomacy.”

Currently, OTI operates on 10 campuses and has expanded its portfolio of conflict excursions to include Turkey-Armenia, Ireland, and the U.S. (race relations).

In each case, the aim is “to bear witness to as many different – and challenging – narratives as possible,” says OTI associate director Susan Seely.

The race relations spinoff, inaugurated three years ago as the Deconstructing Diversity Initiative, runs a bit differently from its international counterparts. Instead of one long trek, students take a series of short jaunts to such places as Manzanar, California (site of a World War II Japanese internment camp); San Francisco/Oakland (to explore gentrification in Chinatown and the history of the Black Panthers across the bay); New Orleans (to examine the federal response to Hurricane Katrina); and San Diego (to learn about borders and immigration). Travelers hear nuanced views from government officials, professors, police, and local activists.

And there have been positive outcomes. More than 60 percent of OTI’s 500 alumni have pursued graduate degrees, often supported by prestigious scholarships. And many participants credit the program with instilling useful career skills.

“The planning, fundraising, organizing, and traveling with classmates and counterparts taught me more than any traditional classroom,” says Katharine Azar ’08, now a philanthropy and social causes consultant whose clients have included Maria Shriver, Dr. Phil, Norman Lear, Verizon, and the duke and duchess of Cambridge.

Other “Olives” have gone on to jobs with think tanks, nonprofits, government agencies, and news media outlets.

Attorney Rachelle Plotkin ’11 says OTI improved her ability to resolve legal disputes: “Much like Israelis must understand Palestinians’ needs, hopes, and fears to negotiate peace, I must understand both the plaintiff’s and defendant’s positions to negotiate a settlement. … OTI didn’t teach me law, but it did teach me the ever-important lawyerly skill to get more than one side of the story.”

As OTI alumni become more established in their fields, Wehrenfennig hopes they’ll give back to the program – both as mentors to new graduates and as donors.

Over the next decade, he says, “our alumni will be in a position to step in to carry the organization” and open opportunities for more Olives to have the same lifechanging experience.

There really is nothing like seeing clashes up close, Malik says: “You can study these things in books, but being there brings them to life.”

Maia Ferdman, a Jewish OTI alumna who graduated from UCLA in 2015, agrees. “Years later, I can still [summon] the sights, smells and sounds of the Aida refugee camp [for Palestinians],” she says. “I feel the sticky heat, hear the muezzin’s call weaving through the hills, and see the little boys kicking soccer balls through the rubble. … It was at this point during my Olive Tree experience that I felt truly displaced, utterly lost and suddenly dislodged from my previous worldview. This was and is my best OTI memory.” •